Chemtrails not a solution but a further problem

Attempts to reverse the impacts of global warming by injecting reflective particles into the stratosphere could make matters worse, say researchers.

A new study suggests the idea, seen as a last-ditch way to deal with runaway climate change, could cut rainfall in the tropics by 30%.

This would have devastating impacts on rainforests in South America and Asia.

The research has been published in the journal Environmental Research Letters.

The concept of curbing rising temperatures by blocking sunlight has been discussed by scientists for many years now.

Some of the ideas have been dismissed as crazy notions, but others have been taken more seriously.

One of the most credible plans involves using reflective particles called aerosols to reflect solar radiation away from the Earth.

This happens naturally when volcanoes erupt, sending plumes of ash into the stratosphere, as with Mount Pinatubo in the Philippines in 1991.

Now a team at the University of Reading have modelled the impacts of a large-scale injection of sulphur dioxide particles at high altitudes around the equator. 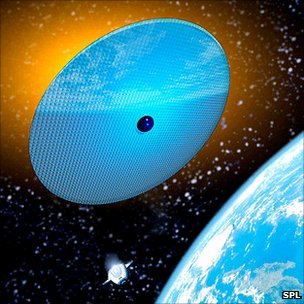 “We have shown that one of the leading candidates for geoengineering could cause a new unintended side-effect over a large part of the planet,” said Dr Andrew Charlton-Perez, one of the co-authors of the paper.

The scientists found that as well as absorbing some of heat coming in from the Sun, the particles also absorb some of the heat energy that comes from the surface of the planet.

“The heating acts to stabilise the part of the atmosphere we live in, by making it more stable it reduces the upwelling of air,” said Dr Charlton-Perez.

“In the tropics much of the rainfall comes from air moving up rapidly, so this acts to reduce surface precipitation.”

Rainfall around the tropics could be cut by 30% with significant impacts on rainforests in South America and Asia and increasing drought in Africa.

The changes would happen so quickly there would be little time to adapt, say the researchers.

The scientists involved in the study believe that this is a new impact that others have missed until now.

“We modelled sulphate aerosols which is sort of an analogue for when you have a large volcanic eruption – but instead of putting aerosols into your model you can also just reduce the amount of solar radiation coming into your system,” said Dr Charlton-Perez.

“When you do that you don’t get these heating effects and you don’t get this slowdown and that’s important because some studies have done that but we think they are missing this mechanism.”

However some researchers have questioned the experiment and the findings.

“I know of no serious scientist who would advocate introducing 100 megatonnes of sulphur dioxide in a four degree warmer world,” said Dr Matt Watson, from the University of Bristol, who was previously involved in a British project to test this concept.

“To state that solar radiation management won’t work based on one extreme scenario smacks of hype rather than a serious discussion.”

Dr Charlton-Perez says that is a fair comment – but he believes his methodology and conclusions are sound.

“What we have done here is a very extreme scenario, we’ve put lots of CO2 into our model and we’ve geoengineered to counteract that.

“It is an extreme case, but by doing the extreme case we are able to isolate this effect much more clearly. We think this effect will go on, even if you geoengineer to a much lesser degree.”

Researchers around the world continue to explore different climate interventions that might be used in extreme circumstances. The Intergovernmental Panel on Climate Change (IPCC), in their recent report, acknowledged that every option should be considered.

But according to Prof Piers Forster, from the University of Leeds, the technologies are still in their infancy.

“At present, these injection technologies do not exist, even on paper, and this precludes an evaluation of realistic effectiveness or side effects.

“If we want to suppress global warming the only game in town at present is reducing greenhouse gas emissions.”

Alice Bauer
I'm tri-lingual with a B.A. in German and Spanish. Culture and creative writing/ journalism are my passions, and I try to use these to create interest and understanding of other people and places. I am an avid hobbyist; I love running, surfing and other sports and making various products like chocolate and soap. I volunteer with different programs to help build strong communities through English tutoring, animal conservation and habitat clean-up.
«As A Latina, Sonia Sotomayor Says, ‘You Have To Work Harder’
Dream Big America Announces Partnership with Latino Startup Alliance»