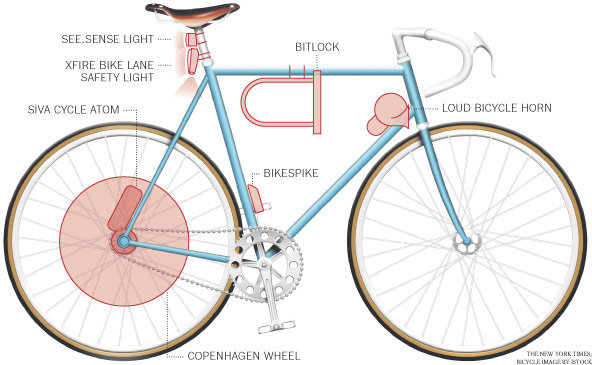 In a widely viewed YouTube video, a cyclist named Casey Neistat, deliberately takes tumble afte tumble while trying to navigate obstructed bike lanes in New York City. The video is funny — it even includes a crash into a parked police car — but it also has struck a chord with bike commuters around the country facing a seemingly endless array of road hazards.

In urban areas, many riders have reason to be nervous, and that in itself is part of a vicious cycle.

“The most common mistake new cyclists make is not riding predictably,” said Ken Podziba, chief executive of Bike New York, a nonprofit group that promotes cycling.“For example, people who are afraid of getting hit from behind by a car will often do things like ride on the sidewalk or ride against traffic, which actually increases the danger that they will get hit by a motorist who doesn’t see them. Fear is a cyclist’s worst enemy.”

Driven in part by riders’ demands for a greater sense of comfort and safety on the road, new apps and gadgets are promising to do for the bicycle what air bags and satellite navigation did for the family car. What used to be a simple, healthful mode of transport is fast becoming a tech festival on wheels.

Perhaps it was to be expected. Travel by bike has surged in recent years, spurred by bike-sharing programs and efforts to set aside and improve bike lanes. New York, Chicago and San Francisco introduced bike-share programs last year, and a dozen cities nationwide are planning to follow suit.

From 1990 to 2012, the number of bicycle commuters nearly doubled in the 70 largest cities, according to data collected by the League of American Bicyclists. Today, Americans make more than four billion trips by bike each year.

One of the biggest grievances of all these cyclists is not being seen. Jonathan Lansey, 28, spent so much time dodging cars on his daily commute in Boston that he began a Kickstarter campaign to finance production of a bike horn that could not fail to get drivers’ attention. His brainchild, Loud Bicycle, sounds like a two-toned car horn and, at 112 decibels, is about as loud. “It’s embarrassing to get honked at,” Mr. Lansey said. “But it’s more embarrassing to get honked at by a bicycle.” He tested the horn on his commute and found that drivers reacted immediately, as they would to another car.

“They’re more worried about damaging their car than another person,” he noted. Philip McAleese, 39, of Newtownards, Northern Ireland, also wanted to make cyclists more visible, so he developed a bike light called See.Sense, which has sensors that react to surrounding light levels and movement. If the cyclist swerves or brakes, for instance, the lights flash in a pattern similar to those on an ambulance or a police car. See.Sense also has a broad beam, so the bike is more visible from all angles, helping to prevent a side-on collision.

Who needs bike lanes at all? The Xfire Bike Lane light is equipped with two high-visibility red lasers that project two three-foot lines onto the road, creating an ad hoc bike lane. The lighted lane is visible to motorists up to a mile away, according to the manufacturer.

But perhaps the most surprising leap in high-tech safety is an inflatable bike helmet called the Hovding, which works much like an automobile air bag. The device, worn around the neck like a quite fashionable scarf, detects the impact of a crash and inflates a sort of instant helmet around the cyclist’s head and neck.

Tests performed by the Folksam insurance company in Sweden suggest it may be three times as effective as a standard helmet. But riders in the United States will have to wait to try it; at the moment, the Hovding is sold only in Europe.

Read the full article here, and learn about protecting your bike as well.

Alice Bauer
I'm tri-lingual with a B.A. in German and Spanish. Culture and creative writing/ journalism are my passions, and I try to use these to create interest and understanding of other people and places. I am an avid hobbyist; I love running, surfing and other sports and making various products like chocolate and soap. I volunteer with different programs to help build strong communities through English tutoring, animal conservation and habitat clean-up.
«S.F. judge blocks destruction of NSA phone records
Losing faith: 21 percent say religion ‘Not that important’»