How more latinos in finance could boost the economy

Sylvia Tergas was recruited out of college to work for Macy’s, moving from up from sales to the financial division. Though she really enjoyed helping colleagues answer questions about their 401Ks and other financial matters, she never pictured herself working in the world of investments.

“I didn’t see myself reflected in the profession. I saw it as very male-dominated…wearing pinstripes and living in New York,” she said. She didn’t see many Hispanics in the field, either.

It wasn’t until Tergas, who’s of Honduran and Cuban descent, helped her own family manage their retirement that she decided to make a career switch. Today, the Maryland-based Tergas is a financial planner for Prudential Financial. Investment services companies are identifying a need to have more like her.

With some 53 million Hispanics in the country, the financial sector sees Latinos as a key growth area and is seeking to boost the number of Hispanics working in the financial industry to help draw more Latino families into the savings and investments world.

In 2012, only 5.9 percent of people employed in securities, commodities, funds, trusts and other financial investment sectors were Latino, according to a Bureau of Labor Statistics report from that year.

Additionally, in a recent Prudential Research survey of 1,023 Americans who self-identified as Latinos and who earned over $25,000, just 15 percent said they used a financial adviser. That compares to 30 percent for the population generally.

Increasing the number of Hispanic financial advisers and expanding financial services to more Latino families is not just good business for companies, it is crucial to growing the economy, said Isaac Cohen, president of DC Inverway LLC and an economic consultant who works primarily with Hispanic businesses.

“My experience working with small Latino entrepreneurs is that most created their companies using personal savings, mortgages of family homes, loans from relatives and credit cards,” said Cohen.

Working with Latinos new to the world of 401Ks, IRAs, mutual funds and even simple savings accounts requires some insight into the role family and culture play in their financial decisions, according to Tergas.

“They may be the first or second generation to be at the level that they can talk about more advanced (financial) strategies than just survival and putting kids through school like their parents. There is a lot of ‘new’ here. I put myself in that category,” she explained. 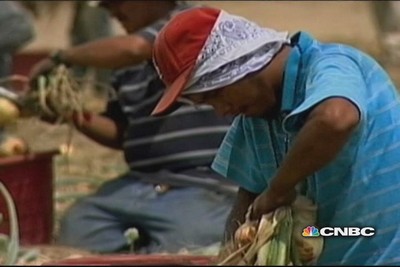 PLAY VIDEO
Washington split over immigration
NBC News’ Steve Handelsman reports on the split in Washington over immigration amid the debt ceiling battle. Speaker Boehner said “there is widespread doubt about whether this administration can be trusted to enforce our laws.”

Jesse Abercrombie, an Edward Jones financial adviser in Dallas-Fort Worth, said his company is trying to increase the number of Latino and minority financial professionals through their Building Results through Inclusion Driven and Guided Efforts (BRIDGE) program.

“Most corporations understand there is a need for diversity. We realized we needed to have some programs to have the numbers where they should be,” Abercrombie said. “Our goals are to attract quality candidates, support them with our BRIDGE ambassadors, and develop our minority financial advisers in leadership positions. Historically, there wasn’t enough of that going on.”

Jody Agius Vallejo, a sociology professor at the University of Southern California and author of Barrios to Burbs: The Making of the Mexican-American Middle Class, said it’s important to recognize there are class variations within the Latino population. But for many Latinos who did not come from wealth, “there weren’t role models that could mentor and usher upwardly mobile Latinos into these careers.”

Hispanic financial advisers like Tergas stress that understanding the context of family and culture is key to helping a client make important decisions about spending and investments. The Prudential survey found 15 percent said supporting elderly family members is a priority, compared to 6 percent of the general population. Moreover, 42 percent of non-U.S. born Latinos regularly send money to relatives in their home countries. Almost one-third of Hispanics placed importance on funding their own children’s or grandchildren’s education, compared to 18 percent of the general population.

“We have to be able to make that a conversation, understand that a client really struggles with this,” Tergas said. “If we don’t respect and break through that and put it out there and really talk about it, we are not going to get too far or too deep with our clients.”

Alice Bauer
I'm tri-lingual with a B.A. in German and Spanish. Culture and creative writing/ journalism are my passions, and I try to use these to create interest and understanding of other people and places. I am an avid hobbyist; I love running, surfing and other sports and making various products like chocolate and soap. I volunteer with different programs to help build strong communities through English tutoring, animal conservation and habitat clean-up.
«Ford mocks Cadillac’s ‘Poolside’ ad for the rich
12 habits of really successful people (Mad Men Edition)»